This section provides findings and relevant information about migration flows around the globe.

Over 258 people in the world do not live in the country in which they were born: international migrants represent approximately 3.4 percent of the world’s population.

→  pared with pull factors operating in a destination country

However, population movements taking place in different regions of the world over the last decades are increasingly characterized as mixed migrations flows.

Mixed migration flows encompass people who move across the borders with diverse motives and entail the crossing of multiple borders and stays of varying length in different countries.

Countries identified as being of transit along a route can also be countries of origin, having then a differentroute value.

In sum, route values take into consideration not only the combination between nationality and route, but also, the geographical position of the country in the region.

There are many factors influencing these migration flows such as violent events
due to conflicts, mass disasters due to natural events. Their effect is usually larger when they take place along the route that at origin. 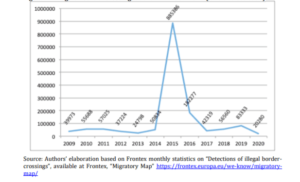 As we can see in the graph, the so-called “migration crisis”, so baptised for its 2015 peak at the EMR, was mainly composed of the movement of Syrians fleeing the Syrian civil war, Afghans and Iraquia.

Mixed migration in the EU is therefore only one side of broader human mobility dynamics. The EMR is merely the final crossing point for mixed flows that originate mainly in the Asian continent and reach the EU.

Population movements arriving at the EU external borders are intrinsically linked to, and deeply embedded in, a wider space of mobility interconnecting countries of origin to multiple transit, destination, and host contexts.

Beyond geographical proximity, it is also the interlocking of the political, economic, security and (migration) policy landscapes that make these different contexts part of a common space of mobility.

This website uses cookies to improve your experience while you navigate through the website. Out of these, the cookies that are categorized as necessary are stored on your browser as they are essential for the working of basic functionalities of the website. We also use third-party cookies that help us analyze and understand how you use this website. These cookies will be stored in your browser only with your consent. You also have the option to opt-out of these cookies. But opting out of some of these cookies may affect your browsing experience.
Necessary Always Enabled
Necessary cookies are absolutely essential for the website to function properly. This category only includes cookies that ensures basic functionalities and security features of the website. These cookies do not store any personal information.
Non-necessary
Any cookies that may not be particularly necessary for the website to function and is used specifically to collect user personal data via analytics, ads, other embedded contents are termed as non-necessary cookies. It is mandatory to procure user consent prior to running these cookies on your website.
SAVE & ACCEPT