This section compiles information about the migration phenomenon within the European Union.

Migration to Europe and the EU Member States is not a new phenomenon. Nevertheless, the number of inmigrants has grown considerably in the last few years.

Currently, the most popular immigrant destination countries in Europe are Germany, Spain, Great Britain and France. However, their figures are relatively low when compared to the countries’ population size. In per capita terms, the top immigrant recipient countries are Luxemburg, Malta, Cyprus, Ireland, Switzerland, and Sweden.

The countries receiving most immigrants in absoulte terms are also among the top recipients of asylum applications. We can observe this in the following picture:

The right of residence in a Member State is a key principle within the EU legal framework on the social rights to which foreign citizens have access. Consequently, its management applies to the national legislation on social affairs in each EU country. 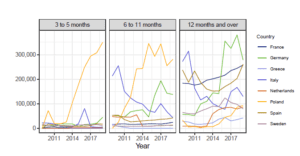 Income levels, the prevalence of poverty and inequality, and the provision of social security benefits can directly affect migrants’ choices for a destination country. These factors are intimately connected to the capacity of destination countries to integrate migrants into the labour market and societies.

In all European countries, women are more likely to be unemployed compared to men. This observation is corroborated in the following picture, which visualises the development of unemployment rates in selected countries. 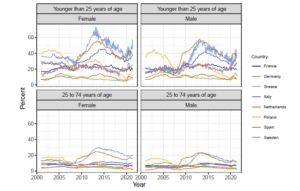 In sum, a wide range of socio-economic indicators and considerations
can both, directly and indirectly, affect migrant decision-making as to the desired destinations.

This website uses cookies to improve your experience while you navigate through the website. Out of these, the cookies that are categorized as necessary are stored on your browser as they are essential for the working of basic functionalities of the website. We also use third-party cookies that help us analyze and understand how you use this website. These cookies will be stored in your browser only with your consent. You also have the option to opt-out of these cookies. But opting out of some of these cookies may affect your browsing experience.
Necessary Always Enabled
Necessary cookies are absolutely essential for the website to function properly. This category only includes cookies that ensures basic functionalities and security features of the website. These cookies do not store any personal information.
Non-necessary
Any cookies that may not be particularly necessary for the website to function and is used specifically to collect user personal data via analytics, ads, other embedded contents are termed as non-necessary cookies. It is mandatory to procure user consent prior to running these cookies on your website.
SAVE & ACCEPT